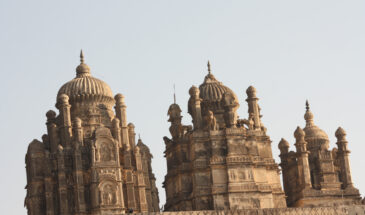 Bhuleshwar is a Shiva temple in Maharashtra, India, about 45 kilometers from Pune and 10 kilometers from the Pune-Solapur highway from Yawat. It was designated as a protected monument.

Lord Shiva is honored at the Bhuleshwar temple. It was created between the late 12th and early 13th centuries. There are numerous beliefs surrounding the construction of this temple. The temple was built during the reign of King Mahadeva or King Ramchandra of the Yadava dynasty, according to historians. At the same time, another group believes that this temple was built by the Chalukya dynasty kings. The precise date of temple construction is unknown.

For over two centuries, the Yadava dynasty ruled the Deccan plateau. During this time, the Deccan region prospered and many architectural marvels were built. In this era, the regional variation of ‘Niagara’ style or Indo-Aryan’ style known as ‘Deccan Style’ originated and flourished. This style is known as the Bhumij style of temple architecture.

The Muslim invaders later vandalised the temple. The outer section of the temple was rebuilt by the Marathas in the late 17th century. The entire original temple is mostly intact and made of black basalt, while the outer section is made of lime, gypsum, and brown basalt found in the surrounding area. Bramhendra Swami repaired and expanded the original temple during the reign of Chhatrapati Shahu, Chhatrapati Shivaji’s grandson.

The temple’s exterior gives little indication of what lies within. A few ancient carvings incorporated into more modern structures outside the temple, as well as the detail on the temple doorway, provide a “heads-up.” But what lies within will almost certainly take you completely by surprise!

Mythological Story behind the name Bhuleshwar-

The goddess felt bad and went in search of the lord. She disguised herself as a tribal woman and danced in order to attract Lord Shiva. Lord Shiva was attracted to her but soon realized she was the goddess Parvati and frowned at her.

The goddess felt bad and fled to a nearby temple, where she is now known as Goddess Kumjai. This act of attracting is known as ‘Bhul’ in Marathi, and Lord Shiva was given the name ‘Bhuleshwar’ as a result. His temple does as well. The Bhuleshwar temple can see a vast plateau but not the Goddess Kumjai temple because they are both upset with each other.

Do check our upcoming tours.