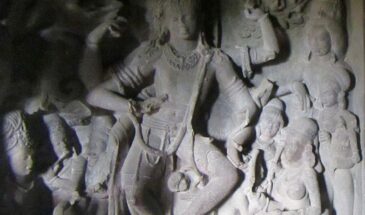 Ellora is a magnificent cave constructed in the early 8th Century by Krishnaraja. Explore Ellora with Firasti and cheris a memorable experience.

The short version of the ancient name Elloorpuram is Ellora, sometimes known as Verul or Elura. The older form of the word has been discovered in historical references such as the Baroda inscription of 812 CE, which acknowledges “the majesty of this edifice” and that “this big edifice was built on a hill by Krishnaraja at Elapura,” with the edifice in inscription being the Kailasa temple. Each cave in India is given a name with the suffix Gufa (Sanskrit), Lena, or Leni (Marathi), which means cave.

Cave 16, also known as the Kailasa temple, is a famous cave temple in India due to its grandeur, architecture, and the fact that it was cut entirely out of a single rock.

Mount Kailasha inspired the Kailasha temple, which is devoted to Shiva. It has a gateway, an assembly hall, a multi-story main temple surrounded by numerous shrines laid out according to the square principle, an integrated space for circumambulation, a garbha-grihya (sanctum sanctorum) wherein the linga-yoni resides, and a spire-shaped like Mount Kailash – all carved from one rock.

Several inscriptions at Ellora date from the 6th century onwards, the best known of which is an inscription by Rashtrakuta Dantidurga (c. 753–757 CE) on the back wall of the front mandapa of Cave 15 stating that he had offered prayers at that temple. Jagannatha Sabha, Jain cave 33, has 3 inscriptions that give the names of monks and donors, while a Parshvanath temple on the hill has a 1247 CE inscription that gives the name of a donor from Vardhanapura.

Upon arrival at Ellora, Check-in to the hotel and have lunch.

Post lunch, start for the first session at Ellora.

Return hotel by evening. Spend an evening at leisure. Stay at the hotel.

Post lunch, start for the return journey towards home.

Reach Pune by late night with moments to cherish for a lifetime.

Pune to Pune Transport by private bus. (Depends on group size, seating capacity will be variable)

Accommodation in comfortable and convenient hotels on triple sharing.

Entrance fees for all sightseeing.

Any other costs such as porterage, laundry, telephone, shopping, alcoholic beverages, mineral water, personal items, and meals or drink not included in the set menu.

Any additional costs incurred as a result of an individual’s illness, injury, or hospitalisation.

Anything that isn’t specified in the list of inclusions.

How to book seat

You can book a seat by paying a booking amount here,