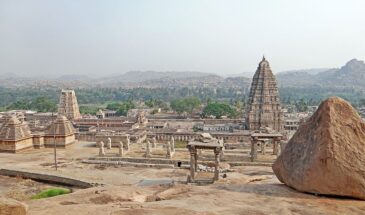 Hampi  – A tale from the past   In the 14th century, Hampi was the capital of the Vijayanagara Empire. According to the…

Hampi  – A tale from the past

In the 14th century, Hampi was the capital of the Vijayanagara Empire.

According to the Persian and European travelers’ accounts, Hampi was a thriving, opulent, and grand city near the Tungabhadra River, with several temples, farms, and commercial markets. By 1500 CE, Hampi-Vijayanagara had grown to become the world’s second-largest medieval-era city, after Beijing, and India’s richest, attracting traders from Persia and Portugal.

The Vijayanagara Empire was defeated by a coalition of Muslim sultanates in 1565, and its capital, Hampi, was seized, pillaged, and destroyed by sultanate soldiers.

The ruins are spread over 4,100 hectares (16 sq mi) in Karnataka, near the modern-day city of Hosapete, and have been described by UNESCO as an “austere, grandiose site” of more than 1,600 surviving remains of the last great Hindu kingdom in South India, including “forts, riverside features, royal, and sacred complexes, temples, shrines, pillared halls, mandapas.

In the 2.5 days tour, we will try to cover major tourist attractions in the city along with a detailed explanation of history and temple architecture.

Places covered are listed as below –

Board the evening Bus at 8.00 PM. Overnight Journey to Hampi (Total distance of 530 KM)

Arrive at Hospet. Check into the hotel, fresh n up, have a nice breakfast, and get ready for an expedition of Hampi. A full-day exploration of ruins of Hampi. In the evening return to the hotel and relax. Stay at Hospet/Kamlapur.

After breakfast leave for the remaining expedition of Hampi. Explore some fascinating monuments of Hampi. Spend an evening at Hemkut Hill and experience the tranquil surroundings of Hampi. Reach the hotel by evening. Stay at Hospet.

Day 3 - We will cover the remaining places of Hampi and start our return journey to Pune by 2 PM.

Where to Pay the amount?

If cancellation received 30 days prior to departure - 90% refund

If cancellation received 30-20 days prior to departure - 70% refund

If cancellation received 20-10 days prior to departure - 60% refund

If cancellation received 10-00 days prior to departure - No Refund

Any advance to Pay?

3000 Rs advance to paid at the time of booking.

Entire amount to be paid 15 days prior to the departure.

What if we couldn't cover all the destinations?

If any sightseeing mentioned is not done due to any unforeseen circumstances then an alternate sightseeing will be done.